In urban slang, a ‘tool’ is generally frown upon. Gone are the days when being a ‘tool’ meant being useful. These days it just means you’re… well, a tool! A useless, undesirable, get in the way tool. That’s the way I feel about gadgets, lots of them. I cry laughing when I see all the infomercials on countless gadgets that promise to make your life easier. ‘Cuz, let’s face it, we’re ALL that much of a moron when it comes to slicing or cooking eggs, chopping onions or just using storage containers. 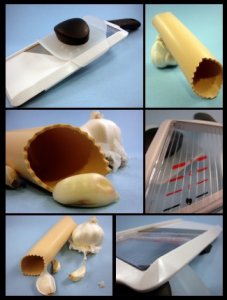 Today, I bring you 2 of my MUST HAVE gadgets, and I don’t own many. But these 2 I would rather not live without, because they ARE tools as tools were originally intended to be.

First, the Garlic Peeler. Under $10 and worth every single penny. I’m not saying you can’t peel garlic without it, or that I pull it out every time I need to peel a clove. What I am saying is that when you need to peel a few cloves at a time, or when you don’t want to end up feeling like you can ward off vampires by your scent, this IS the way to go.

I’ve had mine for at least 5 years now, and when Linz came over for dinner the first time, I used it as part of a magic trick. I’m glad he didn’t think me too silly at the time, but he was impressed by my little tool.

The other prized gadget is my handheld mandolin. I picked this up a year ago? It’s an OXO and it cost me about $20 at Williams Sonoma. I.LOVE.IT! I won’t lie to you. It’s not an item I use on a weekly basis, but it’s already paid for its investment. I use if for plantain chips, to slice potatoes and onions thinly and evenly. It gets a lot of play.

There are other, fancier versions. I imagine the ones that stand on their own would be easier to work with, but I don’t have that much storage space in my kitchen. Quite frankly, my little OXO has 3 blade settings and it does everything I’ve asked it to–and you know how much cooking I do. Proof is in the pudding, or onions, in this case.

My name is Anamaris and I approved this ad (post). 🙂

When was the last time someone asked you the stranded on a deserted island question? You know the one. If you were on a deserted island, what one thing could you not live without? Or some version of that. In prehistoric times, like around the 1980s, the answers were books, walkman, tennis shoes. These days we’re talking iPhone, iPod, iThings.

Well, I have some iThings that I find essential for my cooking sanity. I am by no means saying you have to have these, nor am I supporting or advertising for any products. I’m just sharing some of my favorite gadgets, they may make your life easier too.

As far as hand cranks go, those are it. In terms of kitchen electronics, there are just a few items I’d add to my couldn’t live without you list.

Not a terribly elaborate list, is it? What are some of your kitchen essentials?

In NoLa for our honeymoon

We’re everyday people, just another couple next door. We aren’t necessarily traditional. To be honest, we both have our own way of not blending in. Linz dons a crazy goatee and I like mixing and mis-matching my attire. Conventional we are not. Like most people we know, we are lucky enough to have steady jobs and steady bills. We often sacrifice what we want for what we need. We would love to vacation 6 months out of the year rather than squeeze our vacations into 4 weeks. We are, I guess, living the American dream.

We’re newlyweds still. We e-met in March 2008 and got married this last June. We are an eHarmony couple, even though we both doubted we would find someone we’d want to marry. Somehow we did and we know how lucky we are to have navigated to that website when did. We are a testament for all the cynics and naysayers out there, particularly ourselves.

That’s just a little segue into this: we are not living lavishly. Our 2 bedroom condo is about 1,100 sf, which is a bit of a squeeze without being crammed. Our kitchen is a 10-foot long by 3-foot wide galley, not an awesome restaurant style kitchen, though we dream of one. But our little kitchen serves us just fine.

We both love food, preparing and eating it. Finding someone who enjoys cooking was a really big plus for both of us. When we planned our first date, we both agreed that cooking together sounded like an excellent plan. It would give us something to concentrate on other than the initial awkwardness of meeting for the first time. And so we did and have done ever since.

More often than not I will come up with a  menu of sorts and Linz will busy himself with all sous chef responsibilities. He dices and chops everything, he swears I’m not as adept at this task as he is-WHATEVA! And we both try to clean as we go. But there have been times when our little kitchen looks as if a search warrant had been served on the premises.

What I’m trying to say is that you don’t need a fancy setup to do some mad cooking in your kitchen. You don’t need a whole lot of appliances or equipment. The thing you DO need is a desire to try your hand at it and to see what magic you can whip up. So drop the excuses and get those pots out!