Don’t you just love it when 2+2=4? When things just don’t seem to be lining up and then they just all come together? Cooking and baking should be fun, stress free, an opportunity to wing it. Baking is scientific, so you do need to follow a recipe’s measurements, but that doesn’t mean you can’t make substitutions. 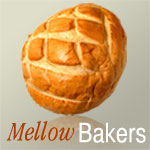 A couple of weeks ago, Andrea from Family&Food invited me to participate in a new bread baking group: Mellow Bakers. Much like the BBA, they plan on following recipes from a specific cookbook, Bread by Jeffrey Hamelman. What drew me to this group is the idea of baking at a mellow pace. I love bread, but I’m trying to stay away from it AND I don’t really want to feel pressured to making a bread a week. So this group suits me just fine.

Paul from Yumarama is the group’s hallway monitor, he suggested we bake a bread a month, further, you can bake the chosen recipe or try a different one if that one doesn’t speak to you. See? Mellow. So the first bread was picked: Traditional English Hot Cross Buns.

I tweaked this recipe out of necessity, and also desire. Let me tell you about my complications. I don’t like lemon peel, from the go I knew I wouldn’t use that. As I thought about it, I knew I wanted to use candied ginger instead. And currants are ok, but I had these gorgeous Sultanas in my pantry… no way I was going to ignore them and purchase currants in their stead. Then…, I had car issues and never made it to the store to purchase the candied ginger AND I ran out of granulated sugar!!! Thankfully, I had brown sugar.

To deal with the lack of candied ginger, and since the recipe calls for simple syrup, I minced fresh ginger and added it when I made the brown sugar simple syrup. The result? Little flecks of sweet gingery goodness that perfumed the buns and a flavorful glaze to  brush the tops. SCORE!

This is the runniest sponge I’ve ever made, out of like 5 so far. It was easy to mix by hand. Warm the milk, it just needs to be tepid and mix the yeast into it. In a separate bowl, combine the flour and sugar, then add the yeasty milk and whisk until well incorporated. 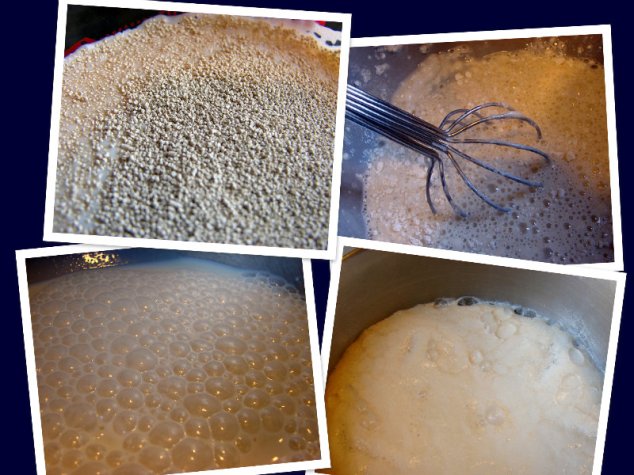 Set aside, cover with plastic wrap and allow it to rise for about 45 minutes. Although it may seem unlikely, it will double in size and hold its shape quite nicely. It looked like a souffle!

If you plan to follow my recipe as I prepared it, then this is a good time to make the simple syrup. However, if you opted for ready-made candied ginger, then you can make the syrup later.

For the syrup and ginger:
1/4 cp ginger, finely minced (approx)
1/2 cp brown sugar
1/2 cp water
Combine all ingredients in a small saucepan and bring to a boil over medium heat. Allow it simmer until the sugar is completely dissolved and the syrup begins to thicken. It took about 15-20 minutes. Remove the ginger bits and set the syrup aside to cool.

Combine the ginger with the raisins.

In your mixer’s bowl, combine the flour, sugar, salt and allspice then mix in the butter. Mix until the butter has dispersed evenly into the flour.

Mix in the egg, then add the sponge and continue mixing for about 3 minutes to develop the gluten.

Add the raisins and ginger mixture and beat until evenly incorporated. Scrape the sides and cover the bowl with plastic wrap, set aside and allow it rise for 1 to 2 hours.

After it has doubled in size, turn the dough onto your countertop and divide it into 12 (or so) even pieces. I got 13 pieces slightly larger than a golf ball. Time to shape the pretty buns. 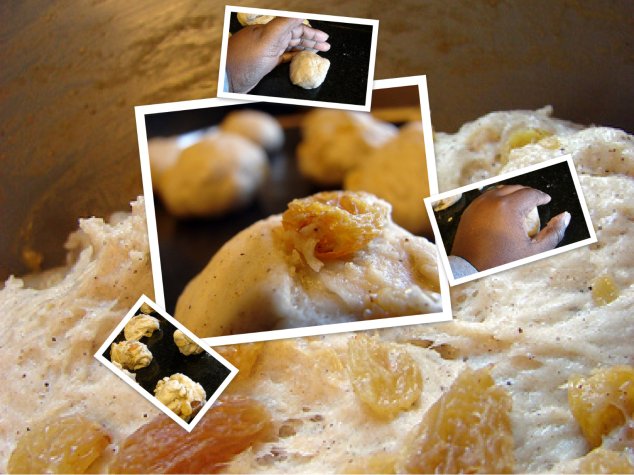 Take each piece and roll into a ball by cupping your hand over it and rolling it on the countertop. You may have a seam, make sure you keep it at the bottom when you transfer the buns to a baking sheet prepared with silpat or parchment paper. Repeat until all buns are done.

Cover the buns with plastic wrap and allow them to double in size for another hour. While they rise, prepare the crossing paste and simple syrup, if you haven’t yet.

For the crossing paste:
In a small bowl combine 1 cp all purpose flour, 3 tbsp oil, about 1/2 cp water. Add water a bit at a time, you want the paste to be smooth and thick, about the consistency of ketchup… Keep in mind that this will need to go through a piping bag, you don’t want it to be too thick or too thin.

Once the buns have risen to twice their original size, preheat the oven to 440. Dump the paste into a piping bag fitted with a medium size round tip. I only had a star tip, that’s what I used. Pipe a line across the middle of the buns going in one direction, then rotate the sheet 90 degrees and pipe lines transecting the first ones, forming a cross.

Pop the tray in the oven for 12-15 minutes or until the tops are golden brown. As soon as they come out of the oven, brush the tops with the cooled syrup.

These are delicious fresh out of the oven, with a dab of butter.

The other option is to eat them Caribbean style. See, as I read this recipe, I realized these sounded a lot like ‘bon‘ I used to eat in Panama. Bon is a cross between a bun and a fruitcake. These seem lighter than I remember bons being, and I like that, but the taste is pretty close.

In Panama, they will serve you a slice of bon, it is buttered and topped with American cheese. So I sliced my buns, toasted them on a skillet with plenty of butter and topped them with sliced cheddar.

You be the judge.